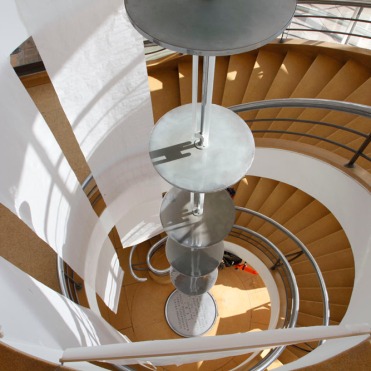 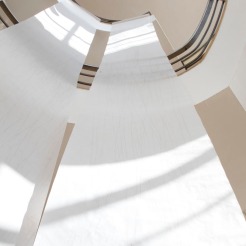 Tracing a shadow whether architectural or human, feels very physical, and makes the immaterial shadow feel in one way very physical but in another totally intangible; it also directly affects time, by extending and delaying the photographic process.

In recent work at the De La Warr Pavilion, a large modernist building I made shadow tracings of the human body as well as the architectural details of the space during the winter months. The scale and physicality of these shadow tracings have become very significant in my work particularly in my desire to ‘hold time’ photographically.  I  found that this work photographically represented the dramatic scale of solar time,  beyond the measured time of the clock within the traditional photographic mix of light, shadow and time. Within that photographic mix of light, shadow and time,  the work becomes photographic in a very primal way, almost relating more to the history of painting than to photography.  The making of a Shadow Map occupies a place before the photographic idea of manual and chemical objectivity, as rather than being created through ‘the pencil of nature as in a photogram, or mechanically through a camera, human agency is very much key to their making. It is this intersection in photography between the mechanical and the haptic that I want to engage with. The Haptic delay in the tracing process: how the tracing of the shadow of a person highlights the otherness and the loss that infuses the photographic process and essentially our state as finite creatures.